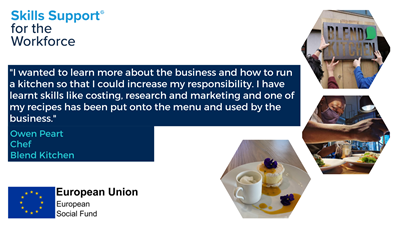 Owen found it hard to access work in the past, due to his disability, and he worried that these barriers and confidence issues would stop him from progressing in his role at Blend. Find out how Skills Support for the Workforce offered him the skillset he needed to earn that promotion.

Owen works at Blend, which is a social enterprise that supports adults with learning disabilities or those who have difficulty getting access to work with training and job opportunities. He took part in the course to learn more about the business and how to run a kitchen, so that he could increase his responsibility and demonstrate his commitment to his job.

Blend had offered training programmes to their staff to increase their skills and knowledge, and to aid them in gaining qualifications. Owen has worked with Blend in the past but has limited experience and no qualifications and he has struggled to get access to work in the past due to his disability. However, Blend had provided a real opportunity for him. The training has also meant that Owen has been able to increase his knowledge and skills, while gaining a recognised qualification. Previously, Owen had struggled with his reading and writing skills, so he discussed a method of training that meant this would not become a barrier to him accessing the course.

Owen has taken part in several classroom training sessions on different subjects, such as business and the wider industry, legislation, customers, and people skills. He learnt a lot more in-depth about the business and his role within it. He also took part in practical training and observations and has learnt a lot more about how to work in the kitchen. Owen had wanted to learn a bit more about the front of house, so he worked on these skills with his tutor. Owen had taken part in classroom training and discussions with his tutor, which had really helped him to build up his knowledge and confidence in his job. Owen came back into training before the restaurant opened, following the Covid lockdown restrictions. He was extremely happy to be taking part in a training programme that got him back into the workplace and out of the house. He enjoyed meeting with his tutor and the other learners and talking about food and recipes. It really helped him to get back into that pattern and used to being out and about again.

Owen was very surprised at what he has achieved on the course. He learnt skills like costing, research, and marketing on his business project. He has also managed to get one of his dishes put onto the menu. Owen was very grateful at the opportunity to start accessing work and training back in March before everything was  open again. Owen has said that he had ‘found the pandemic quite isolating and was pleased to start using his time properly by getting back into the business to see people. Owen mentioned that he has ‘never had a job like this before’ and that ‘it has been great being able to work and learn new things.’ Owen said that ‘by accessing work and training towards the end of the last lockdown had been a huge benefit and had helped with his mental health.’

Completing the course has elevated Owen’s skillset while also showing his commitment to the business, and as a result, he has been offered a regular contract with steady hours, something he had struggled to access in the past. Owen has said that he ‘would consider other courses in the future and is enjoying the training he is currently getting in the kitchen at work’. Owen commented;  “I am pleased to have gained a recognized qualification and to learn new skills, knowledge and to continue training in the kitchen. I have set lots of targets of things that I would like to learn how to do such as developing my front of house skills alongside learning more about bread making, butchery and pastry skills. I feel more confident and have enjoyed my time on the course and since leaving the project I have been working a regular schedule since the kitchen opened. I have also been getting to work with some good chefs and can ask for support in picking up what I want to learn.”

If, like Owen, you want to improve your skillset and potentially progress within your chosen career then get in touch with us. Also, if you’re an employer and you’d like to give your team the opportunity to improve their skillset and increase productivity, we’re here to help. Get in touch here or click here to learn more about our services.

Back
© Copyright The Growth Company 2023