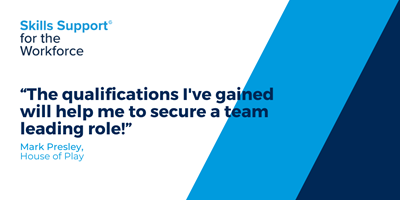 Mark Presley was very keen to advance his own skillset within the organisation, House of Play. His HR manager made it clear to him what qualifications were available, and where he could get them- with Skills Support for the Workforce.

Mark Presley was very keen to advance his own skillset within the organisation, House of Play. His HR manager made it clear to him what qualifications were available, and where he could get them- with Skills Support for the Workforce.

Mark chose us to provide him with the upskill he wanted. Already achieving a level 2 warehousing NVQ with another provider, Mark wanted to go further and achieve higher, and after a session of discussing with Mark and his manager, it was decided that the best course of action would be to undertake a team leading certificate and a lean managing certificate, as Mark wanted to progress, and the business was growing.

When Mark first embarked on the process of achieving these certificates, he disclosed that he wasn’t overly confident in his spelling ability, and that it took a toll on his self-confidence. Ways in which this could be addressed and worked with were discussed, and Mark was fully supported. His work would be checked, and he would receive feedback, so he could learn what he was doing right, and what needed to be improved.

Unfortunately, due to lasting effects of Covid-19, Mark was placed on furlough, as the business, like so many others, was no longer able to grow at the same rate. Mark could have chosen to cancel the process, but instead, he persevered and put his free time to good use, to upskill himself even though the team leader role was now looking unlikely.

Mark worked incredibly hard, and achieved both of his certificates, with his work being up to a very high standard. He should be very proud of himself. More than that, he gained confidence in his writing skills, and in himself. His advisor commented that “He has taken on board feedback I have provided and made improvements which were needed. The qualifications will help Mark to secure a team leading role, either when a role becomes available at House of Play, or with another company. His new confidence will also support his progression to a higher level role.”

Mark’s plan now to continue to learn and grow while on furlough, so that he’s ready for the challenges up ahead.

If you want to upskill yourself or your staff members, ready for a new position, or even if you’re on furlough like Mark and want to increase your skill set, ready for your return, Skills Support for the Workforce can help.

Back
© Copyright The Growth Company 2021